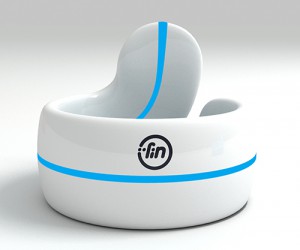 We’ve always been using our hands and finger tips for counting, taking notes, then when technology expanded we started typing on a keyboard and using other gadgets like a TV remote, fire-starter, calculators, smartphones and many, many other things. Basically everything is at our fingertips and maybe most people didn’t realize it, at least until now, until Fin – an amazing wearable hi-tech gadget that can make life so much easier and funnier by using only 1 of our fingers!

The inventors of this thing have been working on it for months. It represents the first of its kind gesture based controller for all your devices out there. Unlike other gesture based devices that are tiring and boring to use, Fin lets you control any smart device via Bluetooth just by moving your thumb over other fingers. For switching from one device to other, all you need to do is tap on your finger. Like we said, Fin makes life simpler because everything is at your fingertips and it feels like having magical powers.

The wearable gadget’s possibilities are infinite for a lot of activities and things like playing games, making business presentations and positively changing the life of a physically challenged man.

Fin comes in handy while you drive. You can answer calls, control the air conditioning and music system, without even moving your hands from the wheel.

Fin is also really amazing when it comes to taking photos. Take as long as you like for getting ready for a photo with friends. When everybody is ready, just tap on your finger and the picture will be made instantly.

The high-tech ring can also help you share files on the social network. Now sharing data is a finger-tip away.

This astonishing wearable gadget works well with head-mounted devices too.