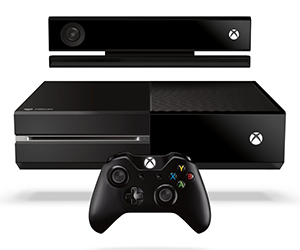 With the Xbox One Game Console, gamers can immerse themselves in the depths of virtual pleasure! Live television, music, movies and of course games, come together in a great experience. Multiple applications can be run at the same time, Skype with your friends while you play a game or watch television. With the snap feature, you can quickly go from one thing to another.

Pause your video game and switch to live television and back again, your game will be right where you left off.

Despite the rumors, the Xbox One Console does not require a constant internet connection. Once you run the initial setup, discs can be run anywhere, anytime. The only exception is for titles which require a system or title update and online features.

An Xbox 360 Gold subscription will transfer to your Xbox One Console. When you stay at a friend’s house, you can log in to your account and have instant access to your personalized settings and applications.

Kinect has been vastly improved for the new console. Most games and apps can be controlled using nothing more than the power of your voice. Menus and other features can be configured to respond to your gestures. By using the command "Xbox On," Kinect will automatically bring the console online. Similarly, "Xbox Off," will put the system into a standby mode. A Kinect module is supplied with every Xbox One, no need to make a separate purchase.

Advanced matchmaking has come to the Xbox One Console. Utilizing a new and improved system, you will be matched to players of similar skill and to those who share similar interests.

The Xbox One runs on an advanced 8-core processor and comes packed with 8 gigabytes of memory. This guarantees that all your apps and games will run smooth and without flaws. A powerful GPU pushes visuals to the next level and beyond.

It's no wonder the Xbox One was such an anticipated console. The blending of so many elements is done perfectly. The console promises to be one of the hottest items this year.