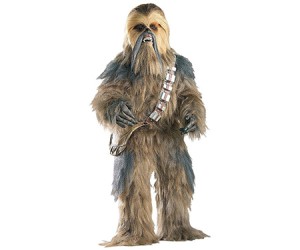 Star Wars is a classic in the art of cinema and nobody can deny that. There are at least a hundred interesting characters in the SW universe, from the movies and beyond them, but one of the most notable characters is the tall, hairy wookie co-pilot of the Millennium Falcon – Chewie. We couldn’t understand what he says every time he roars even if we wanted to, only other representatives of his race can, and maybe Han Solo who’s his best friend.