The Eye of Agamotto Necklace 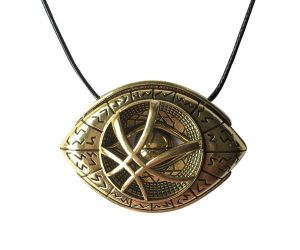 We like it when things like this elegantly crafted Eye of Agamotto necklace have a multi-purpose. First, it’s so nicely made, that it can be worn as a beautiful piece of jewelry on your neck, because it isn’t just some goofy replica. Second, the eye of Agamotto amulet isn’t just any amulet, it’s the magical medallion that the Marvel superhero Doctor Strange wears on his chest and it does come in handy by giving him extra powers.

According to the comics and the story, the eye resides within the amulet and is released every now and then. Just like the name implies, the eye has been used by a mystical, extra-dimensional being named Agamotto the All-Seeing (a.k.a the Light of Truth).

Agamotto is one of the 3 such beings that grant the Sorcerer Supreme knowledge and occult powers. That’s why if you’ve decided to suit up like Stephen Strange’s alter ego for this Halloween or Marvel cos play, you’re going to need both the sorcerer’s costume and the Dr. Strange Eye of Agamotto necklace to make things full. Then you’ll be ready to do magic and steal the show at every party!