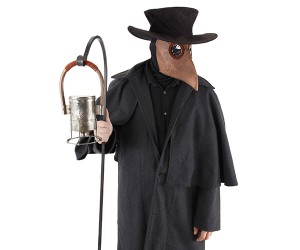 All Saints' Eve is around the corner and you’re still wondering about what costume you should wear? If you want something different and interesting that would let you steal the spotlight during the Halloween party, we could push you in the right direction with this Plague Doctor Mask. Unlike most people that will probably have a banal superhero, zombie, ghost or vampire suit, you can impersonate an ancient medical physician that has treated those who had the plague.

In the 17th and the 18th century some plague doctors began to wear a beak-like mask, filled with aromatic items and straw. The masks were meant to shield them from putrid miasmatic air. The straw provided a filter for the contagious air. The mask also had glass eye openings to ensure visibility. Other distinctive garments were the heavy fabric overcoat, a brim hat and a wooden cane that was used to examine the patients without having to touch them.

Sounds intriguing, right? The plague doctor mask definitely looks freaky and mystic enough to be a genius Halloween disguise, so don’t waste your chance to have the coolest costume around!

Need a costume for a friend? Check out our guaranteed awesome Halloween costume guide!