The LG G FLEX LG-F340 Vertically Curved Smartphone has what it takes to disturb the strong presence of Samsung and Apple on the mobile market! Curved displays and curved, flexible phones are a whole new trend and LG is the company making the best effort in designing such mobile products. No matter what type of phones you prefer you have to agree that this right here is a masterpiece of engineering inspiration.

The G FLEX is very distinctive generally due to the shape which gives its name – a gentle, continuous curve from top to bottom. This curve does 4 things. First and probably most importantly, it makes the phone’s massive size easier to handle, as it physically brings the screen closer to your thumb in one handed operation. Second, it makes talking on the phone more comfortable, reminding of the old banana type phones. Third, it gives watching videos a slightly more cinematic feel. And fourth, the G FLEX’s gentle angle causes it to conform much better to the buttock, which is good news for all you back pocket phone wearers out there. The G FLEX isn’t just about the curve though. LG has also made the back cover of a urethane-like material, giving the smartphone the ability to heal itself when scratched. The back cover is incredibly slippery and feels like no other phone material, which is fun despite its tendency to attract dust.

The flexible mobile device has a 6 inch screen made with the same shape. Though it may be a big phone, it’s also ultra slim (7,9mm) and weighs relatively little for its sizes (177 gr). Despite its considerable proportions, the unique smartphone has been provided with the LG Rear Key. It’s comfortably situated straight under the index finger, making it very easy to use with the volume control and the convenient shortcuts. This unique mobile phone is produced with the latest OLED (organic light-emitting diode) technology. Max resolution reaches 1280 x 720 pixels. The screen’s colors are rich and beautiful with high contrast and user-controllable saturation. The LG G FLEX is powered by a curved, flexible lithium-polymer 3,500mAh, 3,8v battery that ensures high stability and performance for the OLED screen and all your daily activities. The battery life is outstanding. Wrapping up your entire day with the exceptional smartphone, will see you hit the 10% mark after 21 hours of heavy use and nearly 6 hours of screen-on time. Now that’s what we call endurance! 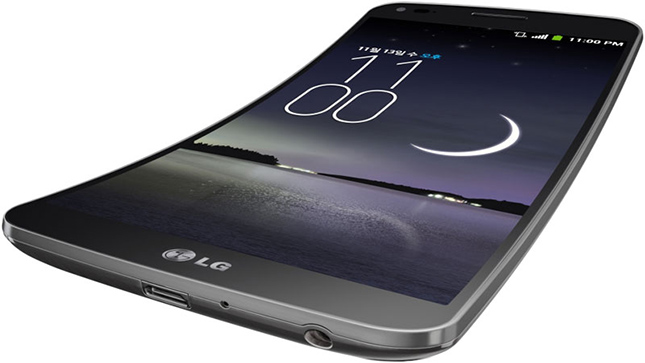 It’s amazing what little boldness in design can do. That also applies to the phone’s software. There are many things to talk about, but we’ll pay attention to a few. The skin feels better suited for the G FLEX than for the G2. The QSlide mini-apps are more useful now when you have a larger display to work with. LG’s new dual window feature allows the using of two apps side by side. The big screen is an advantage when used intelligently and LG have manufactured this model with that in mind. Little touches like the animations when you plug in a cable are quite nice. Almost every animation and scroll effect can be tweeted. If you’re a tinkering type, you’ll find an awful lot to keep you busy in here. 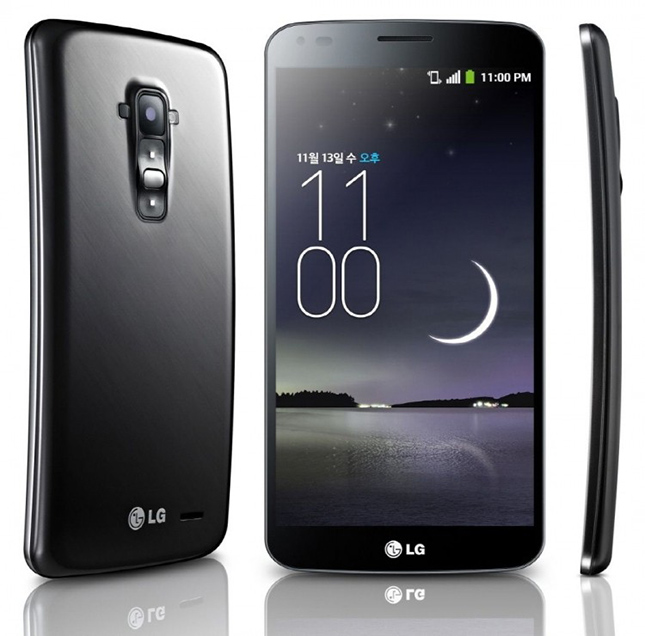 The long lasting powerful phone has been tested between a rural New York, suburban Greater Boston and urban San Francisco over the course of 14 days on a monitored network. No reception trouble has been found over Wi-Fi and the people who were called had no complains about sound quality during voice calls. While LTE is missed, speeds are usually manageable over 3G, depending on the tested market. Speed on the software side is brilliant with almost no lag even when playing serious games.

The LG G FLEX has a 13mpx camera, capable of crisp nighttime images and precise action shots. The camera features faster shutter speed than the G2 and does very well in broad daylight, especially shooting on dynamic mode. Outdoor videos are also sharp, crisp and soaked in beautiful color with audio capture holding up pretty good even in windier weather.