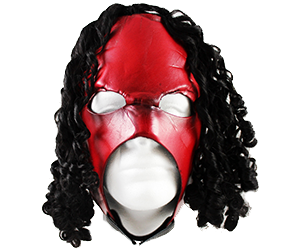 Do you want to be the Big Red Machine, the Devil’s favorite demon Kane from the WWE? You can impersonate the red monster by wearing his mask that comes along with the artificial hair! You’ll be the scariest and most sinister guy on Halloween or on Monday Night Raw! Nobody would dare question your word or fool you!

This is the second Kane mask that Glenn Jacobs began wearing back in 2011 (after he was unmasked for a rough 8 years) when the World Wrestling Entertainment began displaying vignettes with a red burning mask, ending with an inscription that says: “Kane Resurrected”. So in that regard, you can resurrect Kane at Halloween and show your love for one of the most distinguishing and classic characters in wrestling entertainment. And let’s be honest here, Kane is Kane with a mask on, that’s how we remember him and that’s how we fell in love with the Big Red Machine.

So if you’re a young fan of the Devil’s favorite demon but still like his version with a mask better, don’t think twice before opting for Kane’s mask, you won’t even have to grow your hair long to achieve the resemblance (after all, neither did Glenn).