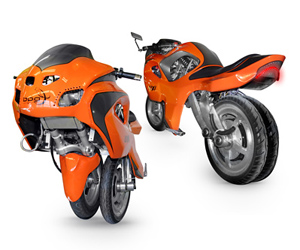 Meet the UNO III Streetbike - the latest generation of motorbikes! It’s not just an ingenious urban streetbike. It’s much more! Because the UNO III has the amazing ability to automatically transform from a two-wheeled city dicycle to a sleek, three-wheeled sports bike (and back again). In Uno Mode, the bike supports itself on its two rear wheels, controlled by internal gyros to maintain stability.

Riding in this mode, the bike allows you to freely and safely manoeuvre around the city and even take the tightest turns. Another amazing fact is that in this mode UNO III is so small that you could even take it in a lift, drive it around the office, or park it in your hallway at home.

Once you however leave the city limits you have the freedom of higher speeds. And as you pick up speed, the Uno III “magically” transforms itself! What happens is that its third wheel automatically folds out, the rear wheels slide back, and your little two-wheeled dicycle transforms into a three-wheeled sports bike. Now you can have your high-speed adventure! And all without sacrificing your overall stability or control!

One more thing is worth mentioning – the UNO III Street Bike is very eco-friendly. It has an electric motor which produces zero emissions, so you can ride around knowing you’re not damaging the planet. And it’s incredibly economical to run, too.

All-in-all, the UNO III Street Bike is the perfect way to beat the traffic jams, both in and out of the city!