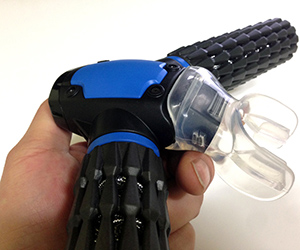 Visiting the ocean world can be really fascinating, but nobody wants to deal with traditional SCUBA gear, as it’s rather complicated. But without it, how could you possibly breath? The answer is TRITON - an oxygen respirator concept for underwater breathing. By simply biting on the device's mouthpiece, you can breath the way you would anywhere else for a longer period of time, plus no formal training is required for use. A few more words about how the underwater respirator works:

Unlike other respirators, this one doesn’t require the skill to breath in and out once you’ve bitten it. TRITON’s design is based on numerous technologies. It obtains oxygen under water thanks to a filter in the form of fine threads with holes so tiny they’re even smaller than water molecules. TRITON compresses oxygen by using a small yet powerful compressor. The extracted oxygen is then being stored in a storage tank. The compressor itself works with a micro battery which is produced by using a next-generation technology. That means its size is 30 times smaller than current batteries and it can also charge 1000 times faster.