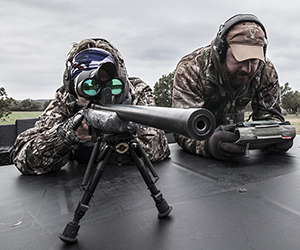 Hunters and rifle enthusiasts alike have faced difficulties with long range shots. This comes as no surprise. Factors like wind, recoil and even human error make difficult shots even harder. By using TrackingPoint - the world's first smart rifle, this challenging shot becomes simple even for a rookie. The TrackingPoint system uses a heads-up display (HUD) which gives real-time information regarding the distance to your target, wind direction and speed...

temperature, compass direction, magnification and much more. This system can almost eliminate the possibility of a missed shot, even when firing from stances which are prone to be more difficult. Shooter errors resulting of bad aim, range miscalculations and environmental factors are a thing of the past.

The system is easy for anyone to use. All the operator needs to do is 'paint' a target, the HUD will automatically adjust regardless of any movement. From there, simply align the tag and the reticule, this will give you a firing solution. Finally, squeeze the trigger, hold it and the system will be armed. It really is that simple!

We promise you'll do as good as Vasily Zaytsev did during World War 2! Not only will you find yourself hitting these difficult shots, you'll also be able to review and share your most spectacular accomplishments. The TrackingPoint system automatically streams video in real-time to your tablet or smartphone, plus in addition to video streaming, the device also records audio. This is a great tool to teach a fledgling hunter the basics. The shot data will be stored, too. Never again will your friends tell you that you're exaggerating your unbelievable shot!

The TrackingPoint system is available in several models. You can easily find the rifle that fits your needs! Every rifle includes a Pelican hard case, tracking scope, a charger, 3 batteries, 200 rounds of ammunition and an iPad Mini which includes the systems apps.

There's no time like the present to become an expert marksman. And with TrackingPoint - the world's first smart rifle, you'll be able to achieve your goal. Accuracy and performance is the name of the game! 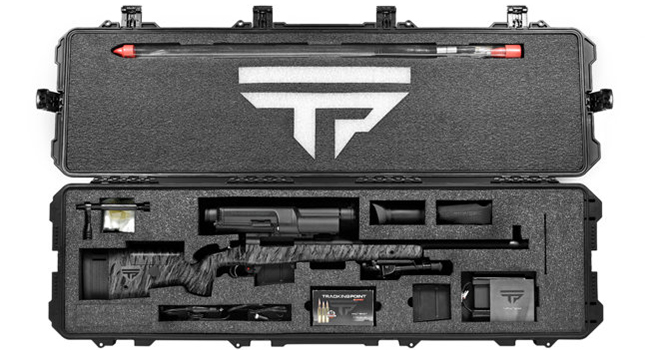