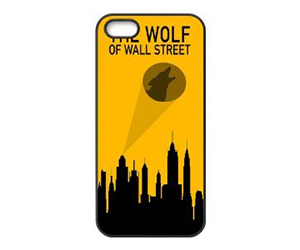 Jordan Belfort is undisputedly surrounded by a lot of controversy! Although he had been investigated by FBI, later sentenced to 4 years in prison and obligated to pay 110 million $ in restitution, we have to admit he was and still is the real deal! Being an incredible motivational speaker and an ambitious stockbroker, he has been called by newspapers The Wolf of Wall Street.

Today, the guy is even more popular thanks to the new Martin Scorsese movie, related namely to him. Delivering an outstanding acting performance, Leonardo Di Caprio plays the role of Jordan Belfort in the film and leaves us with the impression that this man is a real hot shot and truly a nut-head! Let everybody know that you’re a big time fan of the movie, by applying this The Wolf of Wall Street iPhone 5S Case Cover on your smartphone or iPad to protect it from damage! The easy snap on/off design requires no tools. The plastic case has a slim style to perfectly fit your Apple device!