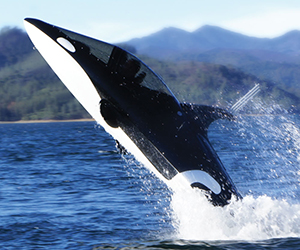 Wicked cool and amazing – that’s how you describe this ultimate diving machine – The Seabreacher! Designed to look like a killer whale, a fierce shark or a dolphin, this magnificent watercraft will make you experience unforgettable moments over and under the water! Built with enough flotation, this scooter can’t sink and has emergency pull pins, so it’s 100% safe! Go slower to cruise above water, or go faster to dive!

The most awesome water scooter has a name – the Seabreacher! There are several models of Seabreacher available – Seabreacher J, Seabreacher X and Seabreacher Y, as they all distinguish themselves with different features. You can hardly think of a better way to spend time in the lake or in the sea, than easily navigating this incredible, high quality diving machine. Nobody can deny the extreme pleasure of steering this unique scooter up to 40 mph on the surface and 20 mph underwater. In case you’re a bigger fan of speed and adrenaline, you can even own the special “X” model, which can increase speed up to 50 mph above water and up to 25 mph when underwater. This watercraft can dive up to 5 feet deep for shorter durations but normally it goes a few feet below, so the snorkel can be kept above the water level. For all those who think this super cool diving machine takes a lot to learn about operating, you will be satisfied to know that it’s not that hard at all! Picking up the basics of navigating it on the surface is surprisingly fast! Maybe longer dives and other tricks need a little more effort to perfect but if you’re eager and practice more, it’s only a matter of days!

Some may wonder if having fun in the water with the Seabreacher holds danger, but you will be 100% convinced in its safety precautions and functions! You don’t need to worry about sinking, because this scooter has a hull, constructed with the necessary flotation, so whatever the situation is, it will always remain buoyant and on the water level, regardless if the engine bay or the cockpit is flooded. The diving machine is designed to be fully watertight, but even if somehow there are leaks, water level in the cockpit wouldn’t exceed the level of your waist, so water can be automatically pumped out by the special pumping system! Should you want to quickly open the vessel in whatever situation, the Seabreacher is provided inside and outside with handles and emergency pull pins.