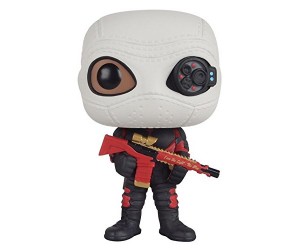 Are you a fan of DC Universe’s most deadly and precise shooter who’s been known to never miss his target? Then you’re bound to love the new adorable Deadshot action figure! Being a main Suicide Squad member since its foundation, the flawless marksman is one of the coolest antiheroes in the group (Harley Quinn is our other favorite!) and seen by many as the leader of the squad. The movie is finally here, so now you can cheer for Floyd Lawton (played by Will Smith) ...

... and have one of the best deadshot toys thanks to FunKo to remind the others who your guy in the squad is.

3 3/4 inches tall, the awesome Suicide Squad POP vinyl represents Deadshot holding a rifle on which there is a sign “I am the Light – the Way”. He’s dressed in his vicious costume, including his traditional and symbolical mask (featuring his scope eye) made of synthetic leather.