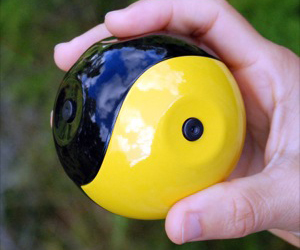 According to trend, cameras and sensors are going airborne and it all begins from this Squito Throwable Sphere Camera! Steve Hollinger invented this piece of technology which represents an intelligent camera that you can throw, one that takes full 360 degree panoramic images and stabilized video while airborne! It’s also planned to be used for search-and-rescue missions and tactical operations.