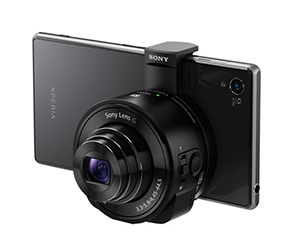 It doesn’t matter if you’re a professional photographer or not, if you want to perfectly capture that special moment on a photo, the Sony QX-10 SmartShot will assist you in that! It’s particularly designed to work with smartphone devices, tremendously boosting their camera abilities! It consists of an image processor, sensor, lens and a battery, so overall it’s a complete camera without the display and the controls.

You will have the chance to choose between two Smart Lens models: the QX10 and QX100, which have a similar concept and operate the same way. The QX100 version is with a bit bigger sizes but is surely a powerful upgrade to any smartphone camera, while the QX10 offers some exposure settings for people who like to process photos.

We’ve already told you about the features this amazing product comprises of and the thing is that the absence of control buttons and display is actually an advantage, because it makes the lens camera module a lot lighter and more compact than regular digital cameras! We also mentioned that Sony SmartShot needs a smartphone device to interact with and this means both Android based smartphones and iPhones are suitable! It uses Wi-Fi to connect to your mobile device or NFC if your phone supports it. After it’s all set you can use the special Sony PlayMemories Mobile application and the touchscreen of your phone to frame shots, to zoom in/out as well as many other settings. If you want to adjust the focus point, there’s a tap-to-focus option, supported by the app. To create a single device for traditional shooting, DSC-QX10 has been supplied with a fold-out grip on its rear, allowing you to clip it onto your smartphone. To add more feeling, the designers have placed a physical shutter button to snap photos and a zoom slider on the lens. To avoid mischance dropping, the lens features a wrist strap. We also have to note how cool it is to have this lens in your one hand and your smartphone in the other and take photos from any given angle you choose! You can easily manage in doing that, as the gadget weights little.