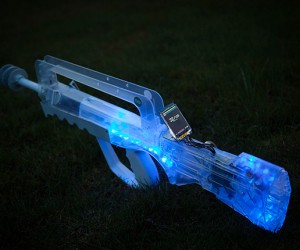 What happens when you combine the best of air-soft, paintballing and laser shooting with an LCD screen? The answer is Skirmos: the Open Source Laser Tag! Now everything that could happen in a video game can be put into a laser tag set which opens the door to many possibilities like forming your own outdoor and indoor battleground or building your own custom game types!

It doesn’t matter if the current game is a realistic simulation, free for all, capturing the flag or a replica from your favorite video game, Skirmos can be adjusted according to what you’re playing.

The open source laser tag’s design will be transparent with bright RGB LEDs that can change colors to maximize your enjoyment. The team behind the project is also trying to construct Skirmos in a certain way so it won’t replicate a real weapon while still looking awesome.

The hardware of this revolutionary laser system will be better than the ones of a regular laser tag and airsoft combined. The reason for that is because it keeps the realism, roughness and range to play outdoors just like airsoft, whilst having the precision, feedback, and dynamic cheat-proof gametypes of lasertags. With that being said, the systems will include accurate iron sights and a rail system for attachments for ranges over 500 feet.