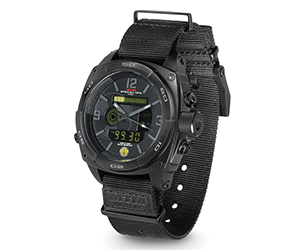 This is no ordinary watch! Worn by the U.S. military personnel, the Radiation Detecting Wrist Watch is specially designed to feature a detector which senses injurious to health ionizing radiation! You can set the minimum radiation threshold and when this level is reached, the watch will sound an alarm. Radiation levels are shown graphically and on the backlit digital display.