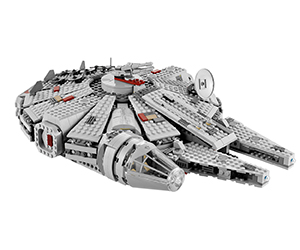 The time has come to help Ben Kenobi in his battles against the dark side! With his fellow comrades Han Solo, Luke Skywalker, Chewbacca and Princess Leia and featuring his evil nemesis Darth Vader, this LEGO Star Wars Millennium Falcon gives you some of the key elements to rewrite the history of the SW universe. Enjoy the incredibly detailed interiors when you open up the hull plates.

There are twin flick missiles, a cockpit cover which detaches and quad laser cannons which can rotate, overall you’ll be truly amazed by the stunning and detailed features of the fastest ship in the Galaxy (at least as Han refers to it). The kit also includes 3 lightsabers, 3 blasters and a crossbow so you can equip the mini figures according to what every character generally uses as a weapon in the movies. Great for 9-14 year olds, but secretly for the dads who grew up watching the saga, the starship is made from 1200 LEGO pieces and is sure to offer hours of entertainment. Now you can build your own Millennium Falcon and escape from the Death Star! Rumor has it, the iconic space ship will also be included in the upcoming Star Wars 7 film, so get ready!