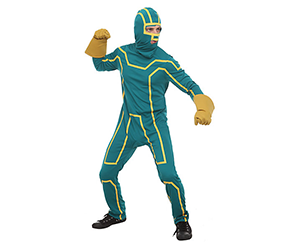 If you’ve always wondered why people don’t want to be superheroes in real life and want to give them a good example that being a superhero would be awesome, then you’re thinking exactly like David Lizewski from Kick Ass! This Kick Ass 2 costume is going to put you in Dave’s shoes, but let’s hope you won’t go on ridiculous missions like him! Anyway, this is one hell of a funny outfit for trick or treat times and freaky costume parties!

It doesn’t really matter if you’re a teenager like David or not, if you’re constantly burying your head in comic books and are seriously considering becoming a real-life vigilante, especially when it’s that Halloween time of the year, maybe it’s the perfect moment to jump in that ludicrous Kick-Ass costume and go on patrol for people with bags filled with candy! And please don’t be shy about it. Maybe MySpace isn’t in the vogue anymore to create a profile there as Kick-Ass like the Lizewski boy did, but hey, feel free to open one in Facebook and Twitter and let everyone know that a new superhero is around!

Just like in the comic book, donning this awesome Kick-Ass costume will create an outbreak of costume-wearing people on the streets when All Hallows’ Eve comes. Just make sure you find your Hit Girl and become a sweets-collecting, crime-fighting duo!

Get ready for Halloween, check out our guaranteed awesome Halloween guide!