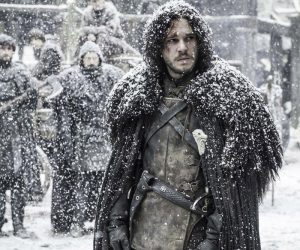 Have you been a fan of Jon Snow since the earlier seasons of GoT? What better way to show it off by wearing the Jon Snow Night’s Watch costume on All Hallows’ Eve, at costume carnivals, festivals and cos parties!

Dressing up in this Game of Thrones costume means you have a strong nature and nobility, since your favorite character ...

... on the HBO show is non other, but the one who’s half Targaryen, half Stark, the one who took the sacred oath to become part of the Night’s Watch, yet fate decided to move a lot further than that. What’s even more, Jon Snow died, came back to life, took back Winterfell and was even proclaimed the “King in the North” after the “Battle of the Bastards”. Not many people had thought that this dude was going to be so relevant in the novel’s events, but perhaps you were one of them!

That’s why you’re going to be the just lord commander and even the “King of Halloween” when you put on the black Jon Snow outfit, which is the traditional gear that rangers of the Wall have.

This is probably the best Jon Snow Halloween costume that you can find for your purposes, and some premium quality Game of Thrones merchandise that a hard core fan would appreciate. The costume features: PU leather waistcoat with rivet, cape with attached fur, belt, and a kilt.

In case you need longer hair to look exactly like the character, here's a great Jon Snow wig.