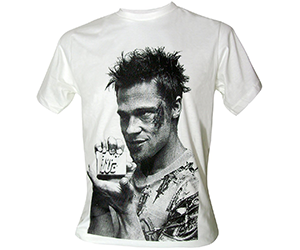 Now that's cool! To have a T-shirt with the busted, grinning face of Brad Pitt’s Fight Club character Tyler Durden! You can see him with his bushy hair and bruises, perhaps after one of them fights he and his more settled persona organize in the movie! You can also notice the main protagonist/antagonist holding a bar of the soap he personally makes from human fat! The coolest garment to show off your uncommon nature!