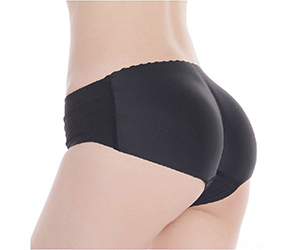 Some women wear an extra padded bra to make their boobs look bigger than they actually are, that’s no secret. But surely there are many chicks out there that would want to add more volume to their behind because it’s not “juicy” enough for their own preferences. Fortunately, for all those freaky females who want to augment their fanny, there is this Fake Butt Women Underwear!

This unique female underwear will make your rear-end look more convex and shaped, while nobody would even suspect you wear it under the jeans, skirt, dress or whatever you’re wearing. This is the most reliable hip up padded enhancer on the market, so don’t hesitate to try it. You’ll draw the attention of every man on the street, in the club or at the office!