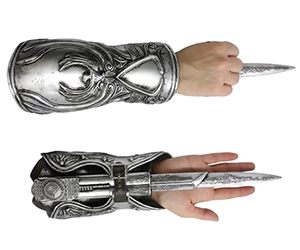 With all of its installments Assassin’s Creed has become perhaps one of the most successful video games ever! The most distinctive weapon of every Assassin Order member is the hidden blade! In Assassin’s Creed II and its sequel Brotherhood the main character Ezio Auditore also has a gauntlet that holds his hidden blade and you have the chance to own it! It’s the final blow to your master Assassin look!