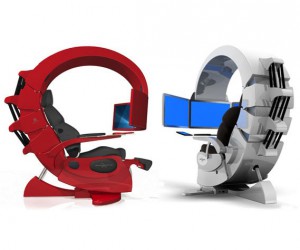 The Emperor 200 will make you feel like you’re in a spaceship’s command center! No doubt this is the ultimate Luxury Computer Workstation, supplied with some exclusive features, like: a touch screen control center, air filtering system, electric powered leather seat, light therapy, 3 LED screens and a flawless sound!

This magnificent workstation is amazingly designed as it resembles a scorpion tail and is a product of supreme technology! For every high technology and computer fan, the Emperor 200 Luxury Computer Workstation will be the most awesome thing on earth! Users will have a small, robotic-like command center right in their rooms! This will be the perfect and most comfortable place for working, posting on Facebook, Twitter, watching movies or playing video games! The Emperor 200 is worth every dollar, because it offers plenty of functions and facilities, some of which are:  Three 24 inch LED screens; a premium sound system for an impressive gaming and multimedia experience; Light therapy and an air filtering system; Control over everything by a handy touch screen control center!