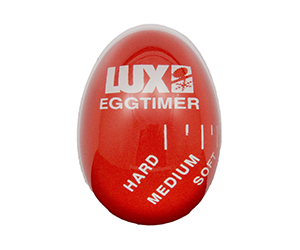 Boiled eggs often get to be part of our meal, they’re a tasty and healthy food. But it sucks when you don’t pick the right time to remove them from the stove and they turn out to be partly raw. If you want to avoid this issue, all you have to do is get this Egg Cooking Timer! Placed among the other eggs, its timer darkens because it reacts to heat just as an egg does!

The egg cooking timer bears a resemblance to what really happens inside of a real egg, so it practically shows the degree of boiling! The red face of the timer is calibrated to indicate soft, medium and hard stages, as well as in between stages. Synchronized with normal eggs, the timer’s face darkens showing the eggs’ current status on the calibrated gauge! It is built with a smart system, so it automatically adapts according to the number of the eggs, water level and even altitude!