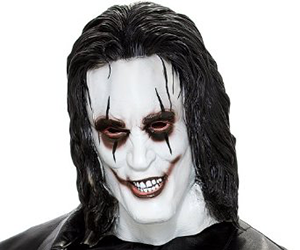 When the first Crow movie came out, everybody were so thrilled about it. And to this day, many believe the original film about the angel of death was the best of all series. This full covering latex costume mask is specially manufactured to resemble the painted face of Eric Draven, played by the late Brandon Lee. Whether you have a black bird on your shoulder or not, you’ll still draw attention by wearing this disguise! Get ready for Halloween!

This is perhaps the most accurate mask if you want to look like the Crow from the movie that first brought James O’Barrs’s exciting character to the big screen back in 1994. The reason for that is that it’s manufactured to resemble Brandon Lee’s face for extra authenticity.

With the Crow mask from the original motion picture, you’ll resurrect Eric Draven back from the dead on every year’s Halloween and you can be sure that you’ll leave your impact every time, because the tragic and heroic story, as well as the mysticism and powers of the Crow have made the character one of the most iconic in the history of comic books. He will never never get old (and it’s not because he’s already dead and basically doesn’t age, hehehe, it’s just because he’s cool and bad ass! Plus look at the bright side, just like in the spirit of the superhero’s backstory, you’ll get your chance to terrify some people who’ve been really annoying you for the last year.

If you've missed the movie and don't know where the original Crow's mask comes, watch the official trailer here.