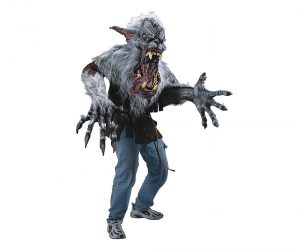 This Creature Reacher midnight howl Halloween costume looks so sick that if a real monster actually met you, it would probably crap itself! This is probably the most terrifying werewolf costume we’ve ever seen, just look at its face and you’d probably feel that way too. Its mouth looks simply abominable and exhales pure blood thirstiness. The costume is made with gruesome arm extensions that end with horrific, over-sized werewolf hands.

Don’t wait for the full moon to get in this suit and go out!