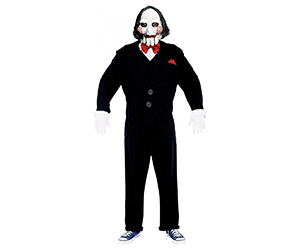 Many fans try to get their hands on the famous Jigsaw Mask from the Saw horror movies that has become a real hit since the release of the original film. But not that many fans do their best to complete the entire look of the prominent puppet dressed in a formal suit. Should you happen to be one of the truest Saw admirers, we guess you would want the whole package, and you can have it with this Billy Puppet Jigsaw Costume!

Made of 100% polyester, the saw puppet kit includes the mask, jacket, gloves and a dickey. Though it hasn’t been identified in the movies, Billy is the name by which the puppet is referred to by directors, writers and cast members. The name was given to it by its real life creator James Wan, who is the co-writer and the director of the franchise. Since its creation, Billy the Puppet has become a kind of a mascot for the Saw series. The puppet was used by Saw character John Kramer (his by-name in the movie is Jigsaw) to communicate with his test subjects (who are actually his victims), by delivering them video recorded messages and rarely in person to describe the sick and sadistic traps he has prepared for the sufferers, as well as the means by which they could survive. Wear the Jigsaw puppet disguise on Halloween to overwhelm everybody with fear and respect!

We have more Halloween costume ideas! Check out our guaranteed awesome Halloween guide!