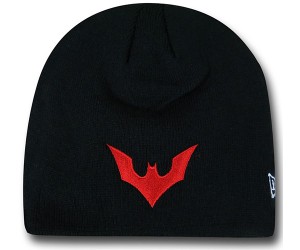 Almost every fan of the classic Batman can’t help but also like the young and bold Terry McGinnis who inherits the mantle of the Batman from the old Bruce Wayne, and begins his midnight, crime-fighting carrier under the guidance of the original Dark Knight! If you support Terry, you can show it during the cold season with this Batman Beyond emblem beanie. The red futuristic batman symbol proudly stands on front of the superhero winter hat.