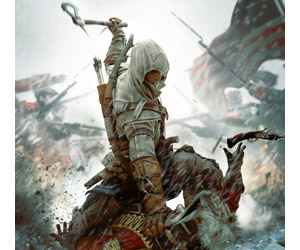 Assassin’s Creed 3 is an action-adventure game for both single and multiplayer. The protagonist Desmond still tries to find the key to prevent the coming Apocalypse and uses the Animus to follow the journey of another of his ancestors – Connor. The game takes place during the American Revolution when fighting for the freedom of his clan, the master assassin not only becomes a part of history, he makes it.

Ubisoft has now finished the making of Assassin’s Creed 3! Following all the other 4 previous versions of the game, this will surely be the most massive one! One of the main improvements is the new Anvil Next engine that will make the environment, animations, revolutionary physics and weather systems look much more real! Developers have also designed a whole new combat system to make the battles intense and spectacular! Unleash your fury upon all enemies, use your new skills and weapons! While still trying to bring all the pieces together and still trying to prevent the coming Apocalypse, the saga’s main character Desmond enters the Animus again so we will witness the life of the master assassin Connor Kenway – a half-English and half-Native American. He fights for the freedom of his clan and becomes the spark that ignites the flame of the American Revolution. Players will not only have the opportunity to find out about the hidden truth behind this memorial war, but will also meet historical figures like George Washington, Thomas Jefferson and Benjamin Franklin among others. In this part, the cities available for exploring will be New York and Boston and you will also travel all the way to the American frontier, which includes cliffs, fields, forests, the villages of Mohawk, Lexington and Charlestown. Connor will even captain a ship to sail along the entire Eastern seaboard so be prepared for sea battles too! Playing multiplayer will include many other details, characters, modes and maps.