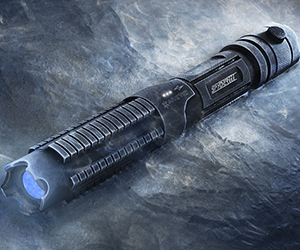 If you were a jedi candidate and found yourself in difficulty with constructing your lightsaber, you could screw the padawan trainings and cheat with the Spyder 3 Arctic Blue Handheld Laser! Embodied in airplane grade aluminum, Arctic is unbreakable and has received couple of improvements to manage the power of its next-generation laser diode.

Designers have made it possible for you to choose the exact power you need, which means the power is variable. Arctic’s strike-bezel tip is luminescent which means your laser can show you the way to your home even in full darkness.

The handheld laser is offered in 4 functional models: constant on, strobe, momentary and bypass. Thanks to the Phosforce, Arctic transforms into a garish white-light torch. The LED panel displays the current power level. The ray’s focus can be increased with the special expander and with the LaserSaber you’ll make everybody and everything around feel the chilling presence of your Arctic.

You have to be clear about the fact that the Spyder 3 Arctic handheld laser is a powerful device and is not a toy for kids! That’s why it features SmartSwitch technology which is code-locked and makes you the true master of the laser, only you have full control over it and can decide who else may have access to it.

Now you’ll be one of the few people to own a real lightsaber and you’ll be fully prepared for the upcoming Star Wars VII.

Additional equipment that comes with Arctic: